Anyone that knows me well can tell you that aside from computers and technology, one of my greatest passions is for mechanical watches. There’s just something about the ability to take mechanical energy, and through a series of gears and regulation mechanisms, take that energy and use it to accurately measure time that captivates me. Now, I’m fully aware that mechanical watches were made all but obsolete in the 70s at the height of the quartz revolution. Quartz watches are cheap, durable, and easy to read. So, they’re an easy choice.

Mechanical watches and digital watches really couldn’t occupy more different corners of the watchmaking industry, right? Well, not exactly. There’s a strange overlap, a sort of twilight zone that exists in the middle where mechanical becomes digital and vice versa. You won’t find a dot matrix screen, a battery, or a quartz crystal in these watches. The term digital doesn’t actually refer to an electronic display. The term stems from digitus manūs, Latin for digit of the hand. Over the centuries the term was adapted to then mean any number from zero to ten. It wasn’t until the early days of computing, when computers abandoned vacuum tubes for discrete digits (the ones and zeros of binary), that term became synonymous with computing.

So, when we talk about mechanical digital wristwatches, what we’re actually talking about is a watch that displays the time in the aforementioned digits, not through an electronic display. Surprisingly enough, if you look back at the history of mechanical watchmaking, digital displays aren’t anything new. We can observe examples of these displays fitted in pocket watches that date back all the way to the late 19th century. 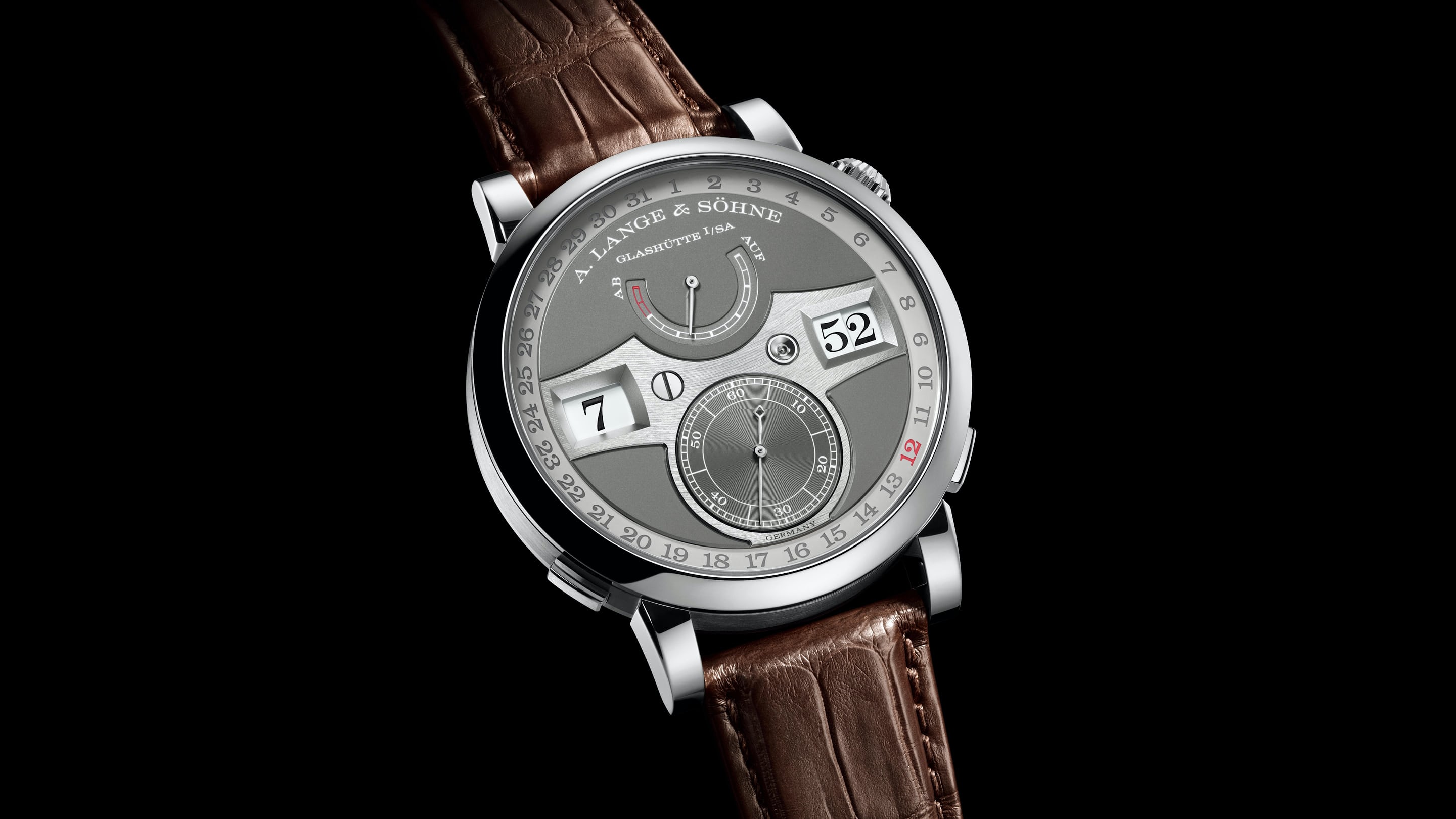 Now, the jumping hour mechanism isn’t anything new. Pocket watches like the original IWC Pallweber had it back in the late 19th century. Traditionally these complications featured a jumping hour display with a creeping minutes display that would often display the numerals at odd/undesirable angles. In the Zeitwerk and most recent iteration of the IWC Pallweber, the minute displays jump instantly, and while that sounds easy enough, just consider the amount of instantaneous torque required to move those discs. A typical jumping complication like a date disk advances only once per day. The three disks needed to display the hour and the two digits for the minutes require a total of 1,608 advances per day. Naturally, the Zeitwerk has a thicker mainspring to compensate for the amount of torque the barrel needs to generate. 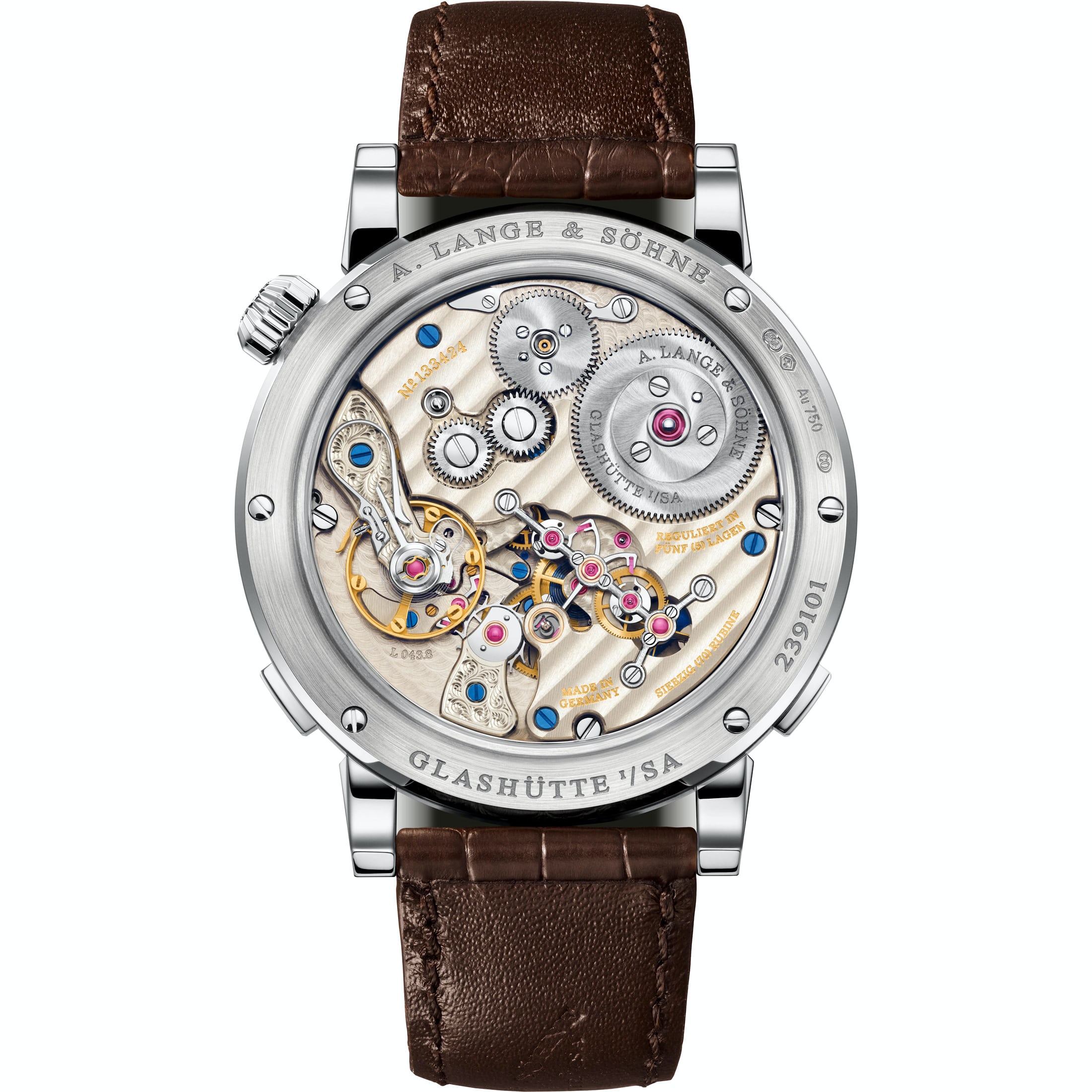 In addition, Lange’s design reverses the conventional principle of winding up and winding down. A high-friction bearing bearing for the spring barrel is used to wind the movement. This change ensures that the barrel wheel can use low-friction bearings to turn as the watch winds down, leaving more energy in the mainspring. All the while, as the barrel winds down, a the Zeitwerk’s remontoire system acts as a mechanical capacitor. It gains, stores, and releases the energy required to move each disc every 60 seconds. It works like a second mainspring, wound by the movement that locks into place over the course of 60 seconds. At the end of each minute, a y-shaped lever slips free and releases the pent up torque required to turn the hours and minutes displays. However, this sudden release of energy needs an outlet to prevent damaging the movement. Lagne has this covered too with the use of a one step fly vane. A component that acts as a tiny revolving door — creating air resistance to slow the action of the movement while still allowing the disk to advance in a fraction of a second. It’s an incredibly complex and truly astonishing mechanism.

Like all of Lange’s timepieces, the Zeitwerk is a bastion of mechanical excellence. However, it isn’t the only watch on the market with a mechanical digital display worth mentioning. The IWC Tribute to Pallweber, Edition “150 Years” takes a more traditional approach and as the name implies, pays tribute to the Pallweber pocket watches of the late nineteenth century. Like the Zeitwerk, the Pallweber implements a jumping hour and minute display. However, unlike the Zeitwerk, the Pallweber’s power distribution isn’t handled through a remontoire system. The IWC Calibre 94200 has two barrels, one hand-wound and one automatic that power two seperate gear trains. This allowed the movement designers to separate their power delivery concerns for each display. Because of the double-barrel design, the Pallweber has a hefty 60 hour power reserve. The Zeitwerk caps its mainspring at 36 hours, cutting you off before you pass the point in the mainspring’s power delivery curve where the remontoire spring is no longer being wound. Neither of these watches conform to the traditional notions of a mechanical wristwatch. I think that’s what interests me the most about this complication.